Django is an awesome framework for building web services using the Python language. However, it is not well-suited for handling long-lived connections, which are needed for realtime data push. In this article we’ll explain how to pair Django with Fanout Cloud to reach realtime nirvana.

The Fanout Cloud gives web services realtime superpowers. The architecture is similar to a traditional caching CDN, except that Fanout Cloud is designed for pushing data rather than caching. Django applications can run behind Fanout Cloud to easily support realtime behaviors such as WebSockets, HTTP streaming, and HTTP long-polling.

The django-grip library is used to communicate with Fanout Cloud. “GRIP” is the name of Fanout’s open protocol for communication between Fanout Cloud and the backend application. For example, to hold a request open in streaming mode, the Django application simply calls set_hold_stream() on the request object before returning the response:

Whenever the server has data to push to any listening clients, it calls publish():

The HttpStreamFormat encapsulates a chunk of response body to be sent. Under the hood, the publish() call performs an asynchronous HTTP POST to send the data to Fanout Cloud.

The django-grip library also includes facilities for WebSockets and long-polling, which we will discuss later on in this article.

So many reasons. First, the inline proxying technique has some great benefits:

Of course, Fanout Cloud being an external service means even more nice things:

To demonstrate how to use Fanout Cloud with Django, we’ll walk through the complete process of making a simple “headline” service that allows storage and retrieval of text messages. Whenever a headline is changed, updates will be pushed out to interested listeners. You can imagine this service being useful for marquees or broadcast alerts.

We’ll start out by first building a non-realtime version of the headline API. We generally recommend that all projects start out this way. Get your CRUD stuff working reliably before you delve into realtime.

Below is the data model for our app (“headlineapp”). Nothing out of the ordinary.

Headlines have a type, title, text, and automatic timestamp. The type field is intended to be machine-readable to determine how the headline should be displayed. The title and text fields are human-readable. The title field could be used as the title of a pop-up window, for example if the headline is used for an alert. The to_data() method is a convenience method that converts the object into a JSON-encodable data structure.

Now for the view code:

With this code, we have an API that lets us:

Here’s how curl could be used to create a headline:

Getting the current value of a headline:

Still with us? Up until this point all we’ve done is create a conventional, non-realtime API. Next we’ll add Fanout Cloud into the mix and liven things up!

Our headline API uses the domain api.headlineapp.org, which we’ve added as a virtual host in the Fanout control panel:

We’ve set it to route to our backend Django application running on Heroku. Of course you can run your own backend application anywhere and you can use any domain name.

We also enable the WebSocket-over-HTTP protocol: 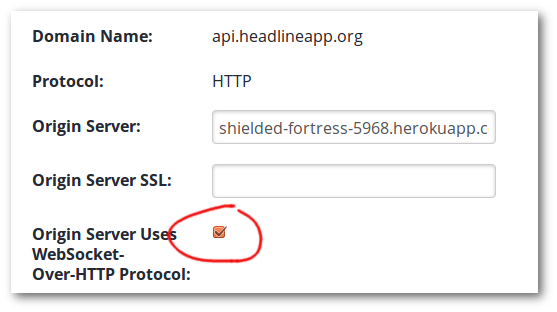 On the Django side, we need the django-grip library installed. We can get it with pip:

In our project’s settings.py file, we include the GRIP middleware:

Finally, we need to set GRIP_PROXIES to contain the Fanout Cloud settings:

Substitute {realm} and {realm-key} with your own Fanout credentials.

For a more compact GRIP configuration, you can use a URL representation instead. This can be handy if you want to use environment variables for configuration, which is what we do for our instance based on Heroku. For example:

Note: If you decide to configure via URL, be sure that your realm-key is URL-encoded. Not all Base64 characters are URL-safe.

Now that the Django application is configured to use Fanout Cloud, it’s time for the fun part. We’ll start simple and add support for Server-Sent Events (SSE). Browsers can consume an SSE endpoint using the EventSource JavaScript API. It is the easiest way to push data in realtime to modern browsers.

We can look for the Accept header to determine if the client wants SSE:

The set_hold_stream() call puts special instructions in the HTTP response telling Fanout Cloud to keep the request open and subscribe it to the specified channel.

All that’s left is to publish updates whenever a headline changes, which we can do in the PUT handler:

The publish call pushes data on the specified channel in one or more formats. We use the HttpStreamFormat here, which specifies a chunk of HTTP response body to send. Since we’re implementing the SSE protocol, we make sure to send data with the proper formatting. The publish() call is asynchronous and does not block the calling thread.

Consuming SSE from a browser is easy:

There you have it! Just a few lines of code and we’ve got a massively scalable realtime API, completely defined and controlled by Django. Connecting clients don’t even know Fanout is there.

Let’s add some basic WebSocket handler code to the headline project. First, we need another include:

And here’s the code that handles incoming requests and messages:

The above code accepts all connections, and subscribes them to channels. It also reads all incoming messages but does nothing with them. If a close event is received (indicated by a None response to the ws.recv() call), then the WebSocket is cleanly closed. Just to be clear here, the Django application is not using WebSockets directly. It is all simulated within the django-grip library and transported over normal HTTP. For more information about the WebSocket-over-HTTP protocol, see the spec.

You’ll notice that the WebSocket code path also returns an empty HttpResponse object. This is needed to satisfy middlewares that are expecting a proper response object to be returned by the view. However, this response is not sent back to the requestor. The django-grip middleware will end up hijacking and rewriting the response based on the actions taken with the request.wscontext object.

Now for the publishing code. We’ll just publish the headline object in JSON format as the WebSocket message:

Clients can then connect via WebSocket to a URI such as ws://api.headlineapp.org/1/ and receive realtime updates of the headline object. The WebSocket.org Echo Test can be handy for testing.

Well that was easy. With just a few more lines of code, we now have a massively scalable and stateless (!) WebSocket API. As with our SSE implementation above, it is completely defined and controlled by Django, and Fanout Cloud is invisible to connecting clients.

So, you’re more of a long-polling person? We should be friends.

Holding requests open for long-polling is similar to the way we handled streaming earlier. The difference is that instead of calling set_hold_stream() and publishing HttpStreamFormat objects, you call set_hold_longpoll() and publish HttpResponseFormat objects.

For our headline service, we’ll make the long-polling work like RealCrowd’s API, where the client can perform a conditional long-polling request based on ETags. We’ll deviate slightly by using a Wait header in the request instead of a query parameter. If the client makes a request including an If-None-Match header and a Wait header, and the value of If-None-Match matches the ETag known by the server, then the server should hold the request open rather than respond right away.

And the extra code to look for the Wait header and use long-polling if necessary:

The set_hold_longpoll() call puts special instructions in the HTTP response telling Fanout Cloud to keep the request open and subscribe it to the specified channel. Unlike streaming, where the response is sent to the client right away, in long-polling mode nothing is sent right away. The response is used for timeout purposes instead. We’ll still specify a 304 response then, which will be sent to the client if the timeout elapses.

When publishing HTTP responses, the entire response may be specified. For the body, we use the pretty-printed form of the JSON, and we also specify headers. This way, the client receives a consistent style of response whether long-polling or not.

Notice how we’re specifying three formats for a single item at publish time. Fanout Cloud only delivers items to listeners if there is an available representation of the item based on the type of listener. We want to be able to publish data to WebSocket clients, streaming clients, and long-polling clients all at once, so we include all of these formats.

Let’s try it out with curl. First, we’ll get the current value of a headline:

If we wait 10 seconds, we’ll eventually get:

If we issue the same request again, and while the request is hanging open we modify the headline object with PUT, then the original request will receive the updated object right away:

There you have it! Creating your own custom long-polling API like this couldn’t be easier.

We hope you enjoy Fanout Cloud and the django-grip library. The complete code of the headline project is on github. Happy pushing!